RAMPRASTHA FACES THE HEAT OF PEHREDAR ON CNBC AWAAZ !!!

I must say this - thank god for media.


Ramprastha builder has delayed his project for 2 years and buyers were running from pillar to post. When suddenly a saviour appears - and surprise surprise, its the media !!!

I think the video in the link speaks for itself, so I will just post the link for now:

For the context, please visit and follow the twitter handle of the anchor Priyanka Sambhav, currently our only beacon of light. She has taken up our case and follow up comments will come in future on her twitter handle.

I get a feeling that like Tintin, reporter, cleaning up Chicago (Tintin in America) Priyanka Sambhav is planning to clean up the real estate sector in India - very much in need of cleaning up. Ramprastha might end up being the test case - or so I hope !!

I will of course continue to write follow up comments here, especially about Vaibhav Ghaggar, the lawyer in the program. He is a giant killer whom I have met before.

Let us take solace from this program - in the absence of our flat !

COMMENTS BELOW:
Posted by Venkat at 1:36 PM 8 comments:

RAMPRASTHA FACES THE HEAT OF 100 BUYERS

29th March 2014. Please see previous post for context (below this one).

I suppose it was only to be expected. By November 9th 2013 based on the activities observed, we were sure that the March 2014 deadline simply could not be met. Now four months later the reality is there for all to see - Ramprastha has defaulted. It could not complete Atrium, it could not complete View. For Edge towers the condition is pathetic for most of the towers - even structure is not complete.

This reality was clear to us even one month ago. Some of the association members went to see Senior Management a month ago. He refused to meet us. Instead he deputed, Manager Customer Care to meet and she did not convey anything meaningful. We knew then that management did not care about us - to them we were just an irritation to be fobbed off one way or another. We knew we had to fight for our rights.

We wrote letters to the Government agencies regarding the development activities in Sector 37D, about roads, water, sewerage and parks and landscaping. Currently everything is non-existent - its a jungle out there. We are yet to receive a reply.

We filed RTI to find out about the sector roads - we filed in Gurgaon office of DTCP and PWD. For that we received a reply saying - this is not our work, we have no information, please apply to Panchkula. Very disappointing - left hand doesn't know - and doesn't want to find out - what right hand is doing. They want us to travel 250 Kilometers. OK, so be it. We have now sent RTI to Panchkula and are awaiting reply.

Most important - we wanted to organise a big protest against Ramprastha. Majority of the association members sent emails to Ramprastha making our demands clear - we wanted a new commitment of possession date but in writing. We wanted the compensation to be increased from April 2014 from 5 to 10 Rs per square feet. And we wanted this in the form of monthly cheques so that we can meet the rent and EMI demands. We asked them to reply by 27th March. As expected we did not get any reply.

We were fully prepared for a big protest on 29th March, because we knew that builder will not reply even to our 88 emails sent en masse - which is exactly what happened. We had mobilised the members of our association, and we put in the application for police permission for protest on 29th March.

But police permission for street protest was denied to us by the govt. because the elections were on !!!

We were very disappointed, but still determined to beard the lion in his den on 29th March - not as a protest but in our capacity as customers.

When we reached there at 11.30, we were surprised that the security was beefed up! There were 3 guards on one gate, 3 guards on second gate and 3 guards at the main door - Ramprastha office was like a fortress!!!

Did they not know that we are all educated professionals ? We were Doctors, Computer IT Professionals, Office Workers, Old Retired People, Women and Children !!!! We were not a Mazdoor Union!!!! Even our protest would be peaceful, and right now we were not even protesting at all!

As soon as 10 of us went in, the guards were told to stop further people from coming in. The glass doors were closed and the huge guards stood behind the glass doors. We said - please allow everyone to come in! They initially said they will speak to us in groups of 10 only. But finally they relented and allowed everyone to come in. Over a 100 of us finally participated.

We heard the same story we had heard before.

Water was not there - we said - ground water use was anyway illegal and court order to implement it came in middle of 2012 !

Labour is not there - but how are other builders completing and delivering?

We told them we cannot believe their verbal assurance. We asked them to give in writing about the completion date, the increased compensation and its monthly disbursal. For all three questions the answer was same - the Senior Manager said he will ask his Senior Management and let us know within a week. We told him - previously when you gave us verbal assurance of reply within a week - you have never ever replied - AT ALL. How can we trust your verbal assurance? We said - we met you a month ago - you knew you were defaulting - so why havent you already prepared the answer after discussing with Senior Management? We sent you 88 emails well in advance - so why havent you prepared answer? He kept repeating "I will reply within a week".

Then we said - OK - give it in writing that we will give reply within a week !

Perhaps people living in big houses and driving expensive cars bought with our money lose their tolerance to slightly raised voice. They do not realise that the money we paid them was our hard earned money paid for our house - which is missing for 5 years. Or perhaps they realise it but dont care? And cannot tolerate a slightly raised voice?

Finally we went out and convinced them to at least receive from us a letter on the points discussed. So in the end - it was written -but by us! We wrote them a letter and they stamped a receiving on it. Will they reply? God only knows - and Senior Management.

While we were waiting for the reply - suddenly a couple of journalists appeared. I dont know how - had she heard something through news networks? Did one of the 100 buyers call her? I dont know.

She was a very nice young lady and said she was from Hindustan Times. Very kindly she listened to what all problems we were facing. We explained how we were having financial hardships and she was very surprised to hear that the compensation due for 2 years was not being paid monthly. Narrating all of our problems to such kind ears was most consoling. As one of the buyers put it - the only thing we get from meeting Ramprastha was to realise that we are not alone - other buyers are also suffering. These meeting were only serving the purpose of sharing our tales of hardship. We unloaded all our problems to her kind ears, gave her all the relevant papers including a misleading advertisement in Times of India from two years ago in 2012 when Ramprastha said - POSSESSION IN SIX MONTHS !!! What a joke !!! More like possession in six years.

After that we left. We will have to wait and see what the journalist hears when she went to meet Ramprastha. Hopefully she publishes a nice long article and completely demolish the false claims for delay like sand, water etc. being used by Ramprastha as excuse. Right now media is our only friend.

Follow up: 30.3.2014
Today the article in Hindustan Times appeared in print and is reproduced below 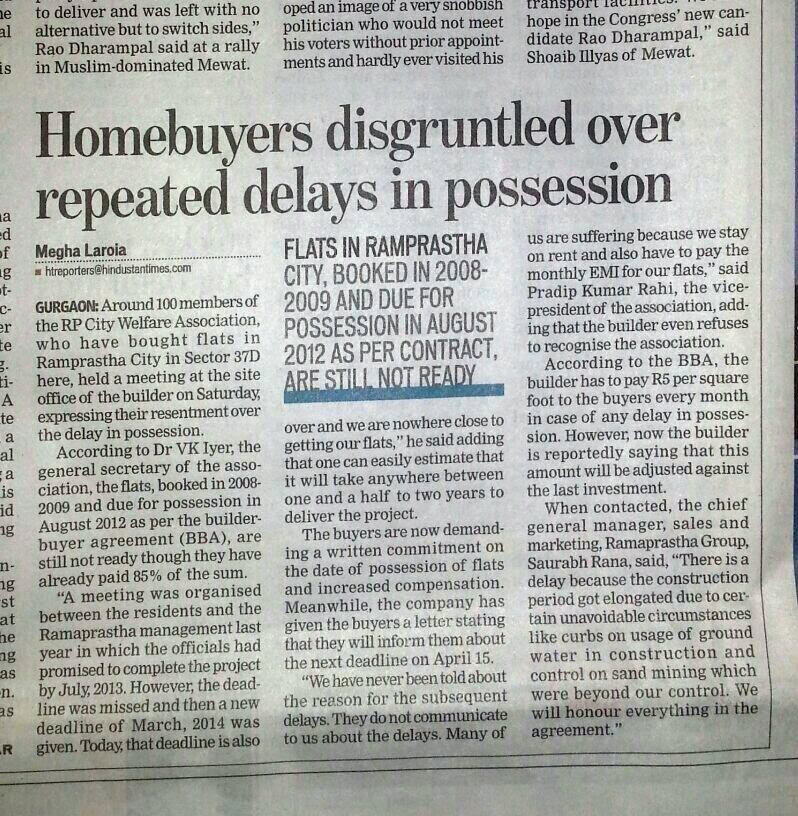 In the meantime the suspense continues.

YOU CAN LEAVE A COMMENT BELOW, VISITOR OR BUYER. PLEASE LODGE YOUR PROTEST.
Posted by Venkat at 1:12 PM 43 comments: